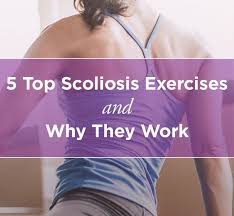 “Drive your body in the direction it is already bending to stretch even further. This can cause the muscle you are stretching to pull back and slightly shorten. Scoliosis affects the ability of the central nervous system to help muscles contract and shorten.”

“The second approach involves doing the opposite: if your spine leans to your left, simply lean to the right. “

“…People that have more than mild scoliosis, Snyder recommends a physician’s assessment first.”

“Step Down and One Arm Reach

Up and Down Dog