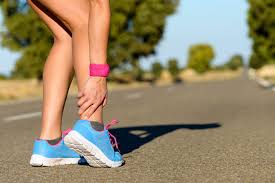 Swelling or bleeding within the compartment due to direct trauma.

An increase in muscle size in the compartment due to physical activity.

The major symptom is pain which is brought on by sport. Usually it takes about 20 minutes of running before the pain gradually rises to the point where the person can no longer continue. The pain is cramp-like and is due to the constriction of blood vessels which prevent blood and oxygen from reaching the muscles. This can lead to permanent tissue damage. Usually, however, the pain is transient and will ease with rest. In some patients the increased pressure in the compartment can be felt as taut tension within the tissues.

Diagnosis can be confirmed with MRI scans and measurement of compartment pressure. This is done by inserting a catheter into the compartment and measuring pressure with a transducer during exercise (running on the spot). Normal compartment pressures in the lower leg are between 10 and 15 mmHg. Values greater than 50mm Hg are indicative of Compartment Syndrome.

In cases where the pain comes on with exercise, and is relieved after rest, conservative treatment such as physiotherapy and the prescription of Orthotics (Insoles) may reduce the severity of the symptoms, but cannot get rid of the problem. Once a diagnosis of Compartment Syndrome has been confirmed through measurement of raised compartment pressure, the most effective treatment is surgery. Surgery for Compartment Syndrome consists of an operation called a Superficial Fasciotomy, which involves splitting the fascia which surrounds the muscle to open up the compartment. This relieves the pressure on the tissues within the compartment. “